Aunt Jemima to be Retired by PepsiCo, Mars and Conagra Follow Suit

The company is retiring the brand imagery and its logo, acknowledging a racial stereotype associated with its origin. The brand will be re-named. 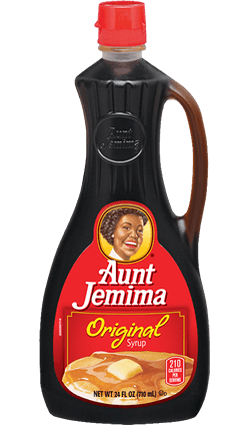 Aunt Jemima is a Quaker Oats brand that started out in 1889 as “the world’s first ready-made mix” by the Pearl Milling Company, and grew to include syrup, frozen waffles, pancakes, and other frozen breakfast products.

PepsiCo acquired the Quaker Oats Company in 2001, and according to news outlets such as NBC News, The Wall Street Journal, CNN, and The New York Times, has announced today that it is retiring the Aunt Jemima brand imagery and logo, over the issue of racial stereotypes associated with the brand’s origin and in an effort “toward progress on racial equality.”

CNN reports a statement provided to the news outlet read, "As we work to make progress toward racial equality through several initiatives, we also must take a hard look at our portfolio of brands and ensure they reflect our values and meet our consumers' expectations."

According to the NBC article, “The picture has changed over time, and in recent years Quaker removed the “mammy” kerchief from the character to blunt growing criticism that the brand perpetuated a racist stereotype that dated to the days of slavery.” It also noted that Kristin Kroepfl, vice president and chief marketing officer of Quaker Foods North America, said “the company has worked to "update" the brand to be "appropriate and respectful" but it realized the changes were insufficient.”

These changes come amidst rising concerns over racial disparity and how brands are addressing and updating their packaging to reflect a modern position, such as Land O’Lakes recent re-design, which dropped the Native American “Butter Maiden” from the iconic packaging.

Update: Mars and Conagra both followed suit today as Mars announced they would also re-brand Uncle Ben's rice, while Conagra plans to review the packaging and branding of the Mrs. Butterworth's syrup line.

Are You Earning What You Should (or Could) Be Earning?

Leading up to its virtual Cobot Expo this week, Universal Robots highlighted several cases where small companies have been using collaborative automation to keep production going amid the crisis.
Aaron Hand
Jul 27th, 2020

A new book reveals how “future-back” thinking—defining what the company will look like decades from now and working backwards—can encourage innovative ideas that will create breakthrough growth.
Stephanie Neil
Jul 24th, 2020

Find quantifiable outlook of specific markets or trends as it pertains to the packaging and processing industry.
Dec 11th, 2019

From digital pneumatics to bionic birds, the automation supplier discusses the technologies that will shape the factory of the future.
Stephanie Neil
Jul 15th, 2020

It’s All About the Cost, Not the Price

A new way to get your packaging and processing insights, research, and innovations. You'll hear from industry thought leaders, executive Q and A's, and more as we dive into your most pressing business challenges.
Dec 11th, 2019

This new playbook from Packaging World showcases the trends, case studies, and how-to tips to help you make the best possible robot purchasing and application decisions for your operation.
Jun 29th, 2020

OMAC, The Organization for Machine Automation and Control, has formed a Workgroup to be comprised of end users and service providers to create a comprehensive best-practices handbook for remote monitoring services.
PMMI, OMAC
Jun 29th, 2020

Hershey's Unwraps their COVID-19 strategy with employees and suppliers

Hershey’s Josh Becker sat down with PMMI’s Sean Riley to talk about a customer’s perspective on how Hershey is handling visits from suppliers, training and service issues.
Sean Riley
Jun 25th, 2020

Lean is all about simplification, streamlining, and eliminating waste. The pandemic is stressing organizations and we're discovering that too lean could make you less resilient. How to strike a balance between lean and flexible.
Andrea Olson
Jun 24th, 2020
More in Home

Hershey's Expectations for Suppliers during COVID-19

Hershey's Josh Becker explains how the chocolate giant has adapted and what it expects from visitors to its facilities.
Sean Riley
Jun 19th, 2020

How Machine Builders Can Participate in Manufacturing Day 2020

Manufacturers need to hire candidates to fill more than 4 million jobs. However, manufacturers will struggle to fill just 2.4 million positions because of the shrinking talent pool.
Natalie Craig
Jun 19th, 2020

Closing the Loop Between CAD, PLM, Digital Twins, and the Cloud

What does back to work look like for field service technicians who are heading back out into the field?
Sean Riley
Jun 16th, 2020

Weathering uncertain times, the leaders of Polypack are handling growth and increased demand, while also keeping their eye on innovation and saving the environment through sustainable packaging, operations, and equipment.
Natalie Craig
Jun 12th, 2020

Software as a Service Enters Engineering and Manufacturing Circles

PLCs Gain Esteem as the Brains Behind the Machine

Typical industry training will be anything but typical as companies pivot to fit new safety guidelines.
Sean Riley
Jun 9th, 2020